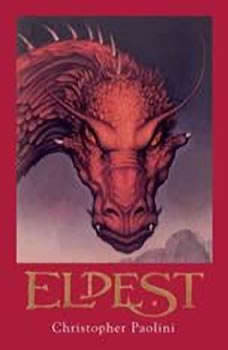 Eragon and his dragon, Saphira, have just saved the rebel state from destruction by the mighty forces of King Galbatorix, cruel ruler of the Empire. Now Eragon must travel to Ellesmera, land of the elves, for further training in the skills of the Dragon Rider: magic and swordsmanship. Soon he is on the journey of a lifetime, his eyes open to awe-inspring new places and people, his days filled with fresh adventure. But chaos and betrayal plague him at every turn, and nothing is what it seems. Before long, Eragon doesn’t know whom he can trust.

Meanwhile, his cousin Roran must fight a new battle–one that might put Eragon in even graver danger.

Will the king’s dark hand strangle all resistance? Eragon may not escape with even his life. . . .


Praise for Eragon:
“Unusual, powerful . . . fresh and fluid. An impressive start to a writing career that’s sure to flourish.” –Booklist, Starred
“Christopher Paolini make[s] literary magic with his precocious debut.” –People
“The new ‘It’ book of children’s lit.” –U.S. News & World Report
“An auspicious beginning to both career and series.” –Publishers Weekly

“[Artemis Fowl] will grab your interest, no matter what your age.”—The New York Post Artemis has committed his entire fortune to a project he believes will save the planet and its inhabitants, both human and fairy. Can it be t...

Is this Artemis fowl’s Last stand?Artemis Fowl’s archenemy Opal Koboi has masterminded a way to simultaneously secure her release from prison and bring the human and fairy worlds to their knees. And, unless Artemis can stop her, the evil...

They said his uncle Ian died in a car accident. Alex Rider knows that’s a lie, and the bullet holes in his uncle’s car confirm the truth. But nothing can prepare him for the news that the uncle he always thought he knew was really a spy ...

Charlie Bone and the Hidden King
by Jenny Nimmo

The next installment in the New York Times bestselling series, CHARLIE BONE AND THE HIDDEN KINGIn Charlie’s most perilous adventure yet, the shadow from the Red King’s portrait has escaped. Strange things start to happen at Bloor’s...

The Angel Experiment
by James Patterson

In James Patterson's blockbuster series, fourteen-year-old Maximum Ride, better known as Max, knows what it's like to soar above the world. She and all the members of the "flock"--Fang, Iggy, Nudge, Gasman and Angel--are just like ordinary kids--on...

I really look forward to book 3!!