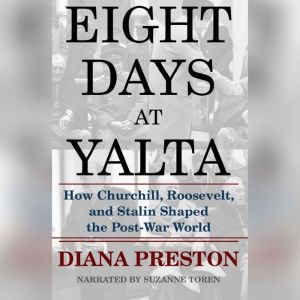 Eight Days at Yalta: How Roosevelt, Churchill, and Stalin Shaped the Post-War World

Meticulously researched and vividly written, Eight Days at Yalta is a remarkable work of intense historical drama. In the last winter of the Second World War, Winston Churchill, Franklin D. Roosevelt and Joseph Stalin arrived in the Crimean resort of Yalta. Over eight days of bargaining, bombast and intermittent bonhomie they decided on the conduct of the final stages of the war against Germany, on how a defeated and occupied Germany should be governed, on the constitution of the nascent United Nations and on spheres of influence in Eastern Europe, the Balkans and Greece. Only three months later, less than a week after the German surrender, Roosevelt was dead and Churchill was writing to the new President, Harry S. Truman, of an iron curtain that was now drawn down upon [the Soviets] front. Diana Preston chronicles eight days that created the post-war world, revealing Roosevelts determination to bring about the dissolution of the British Empire and Churchills conviction that he and the dying President would run rings round the Soviet premier. But Stalin monitored everything they said and made only paper concessions, while his territorial ambitions would soon result in the imposition of Communism throughout Eastern Europe.