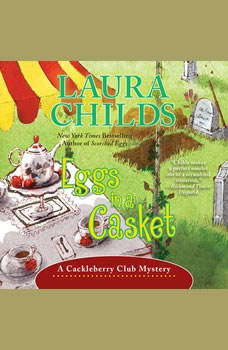 Eggs in a Casket

When the creepy ex-prison warden is found dead in someone else's freshly dug grave, the Cackleberry Club must unscramble the clues and find the true culprit.

Agony of the Leaves
by Laura Childs

THE NEW YORK TIMES BESTSELLING LIBRARY LOVER'S MYSTERY FROM THE AUTHOR OF DUE OR DIE“Avast” in pirate speak means what?*Answering tricky reference questions like this one provides plenty of excitement for library director Lindsey Norris....

Theodosia Browning’s dear friend, Delaine Dish, has asked her to be a bridesmaid for her wedding. But when the big day arrives, everything seems to be going wrong. First, a massive storm is brewing over Charleston. A bad omen? Second, Delaine&...

From #1 blockbuster bestselling author Janet Evanovich comes Plum Lovin, a Stephanie Plum novel that takes adventure, action, suspense (and maybe even true love?) to new heights.WATCH YOUR BACK . . .LOOK BOTH WAYS . . .BECAUSE LOVE IS IN THE AIR . ....

Louisiana businessman Jerry Earl Leland served only a fraction of his five-year sentence for white-collar crime, thanks to some political connections and a few greased palms. But he won't have long to enjoy his freedom... After Jerry Earl's early re...

Due or Die
by Jenn McKinlay

Answering tricky reference questions is excitement enough for library director Lindsey Norris. Until a murder is committed in her cozy hometown of Briar Creek, Connecticut, and the question of who did it must be answered before someone else is check...