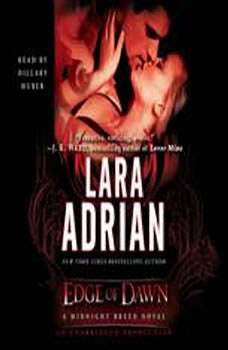 In this pulse-pounding and thrillingly sensual novel, Lara Adrian returns to the mesmerizing world of the Midnight Breed, following new characters into a dark future where an uneasy peace can unravel into war—and a great betrayal can mask an all-consuming love.

Twenty years after the terror of First Dawn—when mankind learned that vampires lived secretly among them—the threat of violence reigns as the two species struggle to coexist. The only group preserving the fragile harmony is the Order, an elite cadre of Breed warriors dedicated to protecting humans and vampires alike. And in this precarious world of torn loyalties and shattered trust, Mira, a fiery squad captain, finds that every fight bears an intensely personal cost.

Raised among the Order, Mira has always believed in the warrior’s code of swift—and even lethal—justice. But the one thing she desires more than the Order’s hard-won acceptance is Kellan Archer, a sexy but troubled Breed fighter. In love with him since childhood, Mira once broke through his tough exterior during an unexpected night of rapture, but the next day he mysteriously disappeared, never to return.

Kellan didn’t think he would ever see Mira again—or have to confront the truth of why he left. After abandoning the Order years ago, he now leads a band of human rebels intent on carrying out their own vigilante rule of law. Yet a high-profile kidnapping assignment brings him face-to-face with the past he sought to avoid, and the striking woman he has tried desperately to forget. And as tensions mount and the risk of bloodshed grows, Kellan and Mira must take sides—between the competing missions that dominate their lives, and the electrifying passion that claims their hearts.

Praise for Edge of Dawn

“With an Adrian novel, readers are assured of plenty of dangerous thrills and passionate chills.”—RT Book Reviews

“The eleventh installment in Adrian’s strikingly original Midnight Breed series delivers an abundance of nail-biting suspenseful chills, red-hot sexy thrills, an intricately built world, and realistically complicated and conflicted protagonists, whose happily-ever-after ending proves to be all the sweeter after what they endure to get there.”—Booklist (starred review)

“Adrian has always been an impeccable writer, but as I started reading this book, I was reminded of just how amazing and talented she is. She paints a vivid picture for every scene, delves deeper into each character until readers know everything about them, and writes some of the best action sequences I've encountered in a long time. . . . Make no mistake, Lara Adrian is one of the premier authors of paranormal romance and with this book, she proves it! . . . Edge of Dawn is a game changer—a book that will revolutionize the way readers see the Midnight Breed world and stir up some excitement! Filled with angst, tortured hearts, above all, selfless love, Edge of Dawn will break your hearts and mend them back up again.”—Fresh Fiction

“A spine tingling thrill ride for both old and new fans alike . . . Edge of Dawn is one of the few stories that deserve more than a five star rating.”—Night Owl Reviews

“Well worth waiting for . . . Adrian once again engulfs her readers in a world or Breed loyalty, fierce passion and emotional overload. . . . The complexity of the plot will leave you stunned to say the least and in my case, left wondering what will happen next. . . . I guarantee you will be begging for more.”—Guilty Pleasures Book Reviews