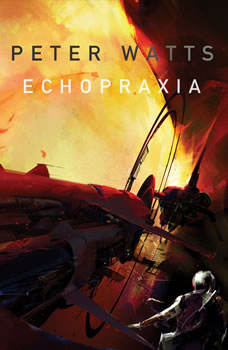 Echopraxia: Booktrack Edition adds an immersive musical soundtrack to your audiobook listening experience! It's the eve of the twenty-second century: a world where the dearly departed send postcards back from Heaven and evangelicals make scientific breakthroughs by speaking in tongues; where genetically engineered vampires solve problems intractable to baseline humans. And its all under surveillance by an alien presence. Daniel Bruks is a field biologist in a world where biology has turned computational. Hes turned his back on humanity, but awakens one night to find himself at the center of a storm that will turn all of history inside-out. Hes trapped on a ship bound for the center of the solar system. A vampire and its entourage of zombie bodyguards lurk in the shadows behind. And dead ahead, a handful of rapture-stricken monks takes them all to a meeting with something they will only call The Angels of the Asteroids.