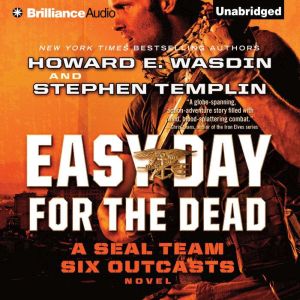 Easy Day for the Dead

They started as soldiers. They became elite warriors. Now they are The Outcasts: The heroes the world will never know….Alex Brandenburg: Smart, steady, and facing a crossroads in his life and career. The SEAL Chief Petty Officer is the Team Leader—leading his team into a living hell….John Landry: The quiet Cajun believes in God and fights like the devil. He’s making a high-altitude jump with a nuke strapped on his back.Catherine “Cat” Fares: Fluent in Arabic. Fluent in feminism. Fluent in warfare…and stuck working with a bunch of savages….Francisco “Pancho” Rodriguez: Even if the world catches on fire, he figures it will just have to wait…until this laughing Mexican-American shows up to save the day.Their Mission: Blow up a secret Iranian biological warfare site with a suitcase-sized nuke. The Catch: Getting out alive…then going back for more…. Drawn from the elite SEAL Team Six, these men and women are working deep in a program called Bitter Ash: taking on the kind of missions that, if they were exposed, will always be denied. For these warriors, every op is the highest possible risk and any moment could be the last. So they deal with it. And then wait for the next call.Now the call has them parachuting into a harsh desert on the border with Afghanistan, meeting a beautiful agent who will lead them to a top-secret Iranian site that must be totally destroyed. For Alex Brandenberg and his fellow SEALs, this mission is like most others: Nothing goes according to plan. And when they’re done, they’ve only just begun.Going back into Iran for a second time brings Brandenberg and his team face-to-face with a maniacal Revolutionary Guard officer who knows Alex’s identity and is hot on his trail. The SEALs must free a hostage in Lebanon. Then the fight takes them halfway around the world—in a frantic battle of courage and fighting skill that America cannot afford to lose….