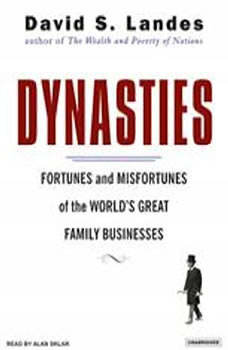 Dynasties: Fortunes and Misfortunes of the World's Great Family Businesses

Through perseverance, solid ingenuity, and unwavering determination, family-run companies—dynasties—have dominated wealth and business throughout the last two centuries. One third of Fortune 500 firms are family owned and, in most cases, the ideal of the family business is one synonymous with continuity, watchful leadership, and dedication to success. But what happens when bad behavior, extravagance, and laziness—all very real enemies of industry—are allowed to proliferate? In Dynasties, bestselling author and historian David S. Landes scrutinizes the powerful family businesses that rule both the financial and industrial sectors across Europe, Japan, and America to determine what factors can cause a dynasty to flourish or fail. Focusing on three areas—banking, automobiles, and raw materials—his cast of characters speaks to the power of the family enterprise: Ford, Rothschild, Morgan, Guggenheim, Rockefeller, and Toyoda are but a few whose histories contain all the drama and passion expected when exorbitant money, power, and kinship intersect. Drawing on his immense knowledge of economic history, Landes offers a new reading of the dynastic business plan of the last two centuries—with surprising recommendations for the coming one.