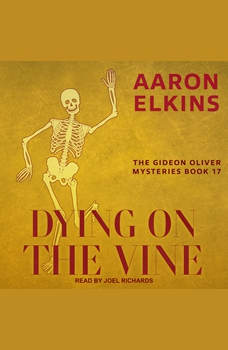 Dying on the Vine

Edgar® Award-winning author Aaron Elkins's creation-forensics professor Gideon Oliver-has been hailed by the Chicago Tribune as "a likable, down-to-earth, cerebral sleuth." Now the celebrated Skeleton Detective is visiting friends at a vineyard in Tuscany when murder leaves a bitter aftertaste

When Gideon Oliver and his wife, Julie, are in Tuscany visiting the Cubbiddu family, the renowned Skeleton Detective is asked to reexamine the remains of a mysterious family tragedy. Pietro Cubbiddu, former patriarch of the Villa Antica wine empire, is thought to have killed his wife and then himself in the remote mountains of the Apennines. It does not take long for Gideon to deduce that, whatever happened, a murder-suicide it was not.

Soon Gideon finds himself in a morass of family antipathies, conflicts, and mistrust, to say nothing of the local authority's resentment. And when yet another Cubbiddu relation meets an unlikely end, it becomes bone-chillingly clear that the killer is far from finished
Recommended

Dying on the Vine
A Gideon Oliver Mystery #17