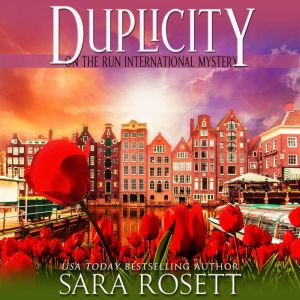 They’re separated by almost a century. Yet, they’ll both hunt the same stolen masterpiece . . .

London, present day. Art recovery specialist Zoe Andrews really needs a break. And all that stands in the way of a well-deserved romantic getaway is an open-and-shut case tracking down a valuable painting’s origin. But Zoe’s vacation plans unravel when the priceless piece is lifted from the gallery, throwing her headlong into a media frenzy.

England, 1923. Olive Belgrave prides herself on discreetly solving rich people’s problems. But her latest assignment to catalogue a stately manor’s artwork collection would be far easier if the staff weren’t mysteriously hostile. And the job turns from irritating to dangerous when she interrupts a shadowy intruder attempting to make off with a rare canvas.

As both women pursue the artwork, they’ll each confront swindlers who hide behind every frame . . .

Duplicity is the seventh book in the On the Run International Mysteries series. If you like parallel stories, puzzling robberies, and scenic tours of Europe, then you’ll love Sara Rosett’s enthralling novel.