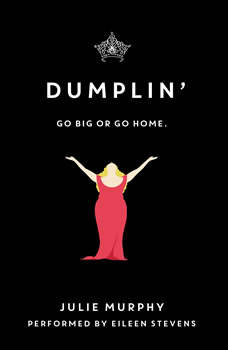 Soon to be a Netflix film—featuring Jennifer Aniston, Danielle Macdonald, and Dove Cameron, as well as a soundtrack from Dolly Parton!The #1 New York Times bestseller and feel-good YA of the year—about Willowdean Dixon, the fearless, funny, and totally unforgettable heroine who takes on her small town’s beauty pageant.Self-proclaimed fat girl Willowdean Dickson (dubbed “Dumplin’” by her former beauty queen mom) has always been at home in her own skin. Her thoughts on having the ultimate bikini body? Put a bikini on your body.With her all-American beauty best friend, Ellen, by her side, things have always worked . . . until Will takes a job at Harpy’s, the local fast-food joint. There she meets Private School Bo, a hot former jock. Will isn’t surprised to find herself attracted to Bo. But she is surprised when he seems to like her back. Instead of finding new heights of self-assurance in her relationship with Bo, Will starts to doubt herself. So she sets out to take back her confidence by doing the most horrifying thing she can imagine: entering the Miss Clover City beauty pageant—along with several other unlikely candidates—to show the world that she deserves to be up there as much as any girl does.Along the way, she’ll shock the hell out of Clover City—and maybe herself most of all.

Nell Crane has never held a boy’s hand. In a city devastated by an epidemic, where survivors are all missing parts—an arm, a leg, an eye—Nell has always been an outsider. Her father is the famed scientist who created the biom...

Tree, a six-foot-three-inch 12-year-old, copes with his parents’ recent divorce and his failure as an athlete by helping his grandfather, a Vietnam vet and recent amputee, and Sophie, a new girl at school.

The Sacred Lies of Minnow Bly
by Stephanie Oakes

An emotionally raw debut about the dangers of blind faith-and the power of having faith in oneself The cult known as the Community has taken everything from seventeen-year-old Minnow: twelve years of her life, her family, her ability to trust. And w...

Nothing
by Annie Barrows

From the acclaimed #1 New York Times–bestselling coauthor of The Guernsey Literary and Potato Peel Pie Society and the author of the award-winning and bestselling Ivy + Bean books!This teen debut tells the story of Charlotte and Frankie, two ...

Wait for Me
by An Na

Mina is the perfect daughter. Bound for Harvard, president of the honor society, straight A student, all while she works at her family’s dry cleaners and helps care for her hearing-impaired younger sister. On the outside, Mina does everything ...

Who ever said being nice would get you to the top?Certainly not Alexandra Miles. She isn’t nice, but she’s more than skilled at playing the part. She floats through the halls of Spencer High, effortlessly orchestrating the actions of ev...

The Incident on the Bridge
by Laura McNeal

From National Book Award nominee Laura McNeal comes a gripping, tautly-told novel that is at once hopeful and harrowing. Perfect for fans of We Were Liars and Bone Gap.   When Thisbe Locke is last seen standing on the edge of the Coronado Bridg...

Doesn’t matter who did it. Not anymore. I did the time. It’s over.”When Drix was convicted of a crime—one he didn’t commit—he thought his life was over. But opportunity came with the Second Chance Program, the gov...