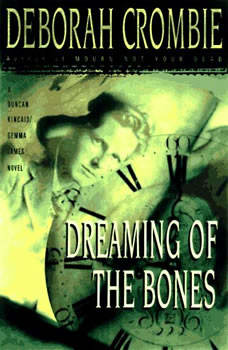 Dreaming of the Bones

Often compared to both Ruth Rendell and P.D. James, Deborah Crombie is internationally acclaimed for her deftly written mysteries that combine suspense, with lyrical prose. Sharply etched characters further enrich this story of tangled relationships and dark secrets. Twelve years after their divorce, Scotland Yard Superintendent Duncan Kincaid receives a phone call from his ex-wife Victoria asking for his help. While working on a biography of the late poet Lydia Brooke, she has uncovered information that has her convinced Lydia's suicide five years ago was really murder. As Duncan begins his investigation, another murder occurs closer to home. Now he finds himself frantically searching for clues in Lydia's complicated past to find the killer before he strikes again. Award-winning author Deborah Crombie has crafted a beautifully written, multilayered mystery that leaves you gasping with surprise. Jenny Sterlin's narration deftly creates an air of suspense while capturing every nuance of the language.

The Chameleon's Shadow
by Minette Walters

When British lieutenant Charles Acland returns home from Iraq, his serious head injuries are the outward manifestation of a profound inner change: he may be suffering from post-traumatic stress disorder, or it may be, as his psychiatrist suggests, "...

Commander Adam Dalgliesh, P. D. James’s formidable and fascinating detective, returns to find himself enmeshed in a terrifying story of passion and mystery -- and in love.The Dupayne, a small private museum in London devoted to the interwar ye...

The Lighthouse
by P. D. James

A subtle and powerful work of contemporary fiction.Combe Island off the Cornish coast has a bloodstained history of piracy and cruelty but now, privately owned, it offers respite to over-stressed men and women in positions of high authority who requ...

The Water's Lovely
by Ruth Rendell

The award-winning author of The Babes in the Wood and The Rottweiler brings us another terrifically paced, richly drawn novel of suspense and psychological intrigue.Weeks went by when Ismay never thought of it at all. Then something would bring it b...

Adam Dalgliesh takes on a baffling murder in the rarefied world of London book publishing in this masterful mystery from one of our finest novelists. Commander Adam Dalgliesh and his team are confronted with a puzzle of impenetrable complexit...