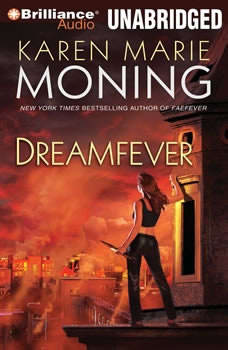 MacKayla Lane lies naked on the cold stone floor of a church, at the mercy of the erotic Fae master she once swore to kill. Far from home, unable to control her sexual hungers, MacKayla is now fully under the Lord Master’s spell.He has stolen her past, but MacKayla will never allow her sister’s murderer to take her future. Yet even the uniquely gifted sidhe-seer is no match for the Lord Master, who has unleashed an insatiable sexual craving that consumes Mac’s every thought—and thrusts her into the seductive realm of two very dangerous men, both of whom she desires but dares not trust.As the enigmatic Jericho Barrons and the sensual Fae prince V’lane vie for her body and soul, as she rallies the sidhe-seers to fight an impossible battle and the power of the Dark Book weaves its annihilating path through the city, Mac’s greatest enemy delivers a final challenge....

OK, I listen to audio books on my commute. Not often that i actually take a book inside the house to listen to it. The 5 stars are because I couldn't stand it. Had to hear the rest of it. It starts off kinda slow. You don't realize, however, that it's sucking you in. You don't realize how hypnotic is the Voice. I read the first books in this series and have listened to the last one. The audio book is spectacular. I love the male voice. Actually, the female voice is exquisite as well, and FINALLY some audio book has figured out that we don't WANT to hear a female imitating a male or vice versa. Lovely, LOVELY male voice. We are as hypnotized as MacKayla. Ah, Barrons. Was there ever anything so sweet as that dichotomy we call Jericho Barrons. Excellent plot. Excellent world. Excellent new author. If there is one phrase that characterizes this addictive series, it is, MY monster. If it didn't kill me, would something else?