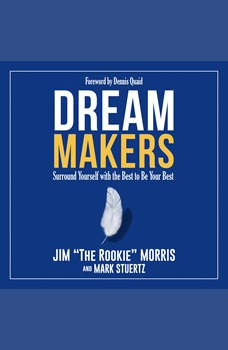 Dream Makers: Surround Yourself with the Best to Be Your Best

Jim Morris is no stranger to big dreams. Since he was five years old, he passionately yearned to play baseball in the major leagues. However, despite all his hard work and determination, a series of unfortunate events and injuries scuttled his career before he was twenty-five. Doctors told him he would never play again. Then at age thirty-five-after a string of highly implausible events and at an age when most players are retiring-Morris found himself on the mound as a relief pitcher for the Tampa Bay Devil Rays. His return to the game was so incredible that Disney made his story into a heartwarming film-The Rookie-with a stellar performance by Dennis Quaid. It was released to popular acclaim and was a huge box office success. It won the ESPY for Best Sports Movie in 2002 and the CAMIE Award for Character and Morality in Entertainment. Dream Makers picks up where The Rookie left off. This compelling memoir explores the untapped territory of Morris's life, including his contentious relationship with his father, his incessant and grueling struggle with pain and addiction, the mentorship with his wise and loving grandfather who kept him grounded, and the resolve and faith that drove him to overcome every tribulation.