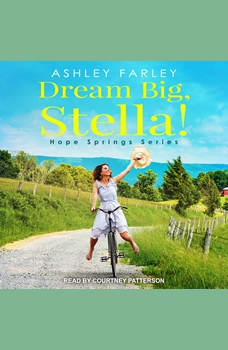 Stella Boor's biological father is a nameless, faceless sperm donor. At least, that's what her parents have led her to believe. Imagine her surprise when she learns he's none other than rock legend Billy Jameson, and that Billy has died and left Stella a historic inn on a sprawling farm in the mountains of Virginia. A city girl at heart, Stella can't imagine living anywhere but New York. Her first inclination is to sell the property. But the terms of Billy's will stipulate she manages the inn for three years before putting it on the market. Stella considers what's really keeping her in New York. Her hotel management career is off to a rocky start; she's lost three jobs in less than a year. She's grown apart from her best friend, and her so-called boyfriend is only interested in late-night booty calls. Something is missing from Stella's life. On impulse, she hops on the next train headed to Virginia hoping to find happiness. When she sees the dilapidated state of the inn, Stella realizes she's in over her head. But the more she learns about the fascinating Jameson family, the more she wants to know. Why did her mother keep Billy Jameson a secret? Were her biological parents in a relationship, or was she the result of a one-night stand? And why did her father wait until after his death to bring Stella to Virginia?

Beneath the Patchwork Moon
A Hope Springs Novel #2