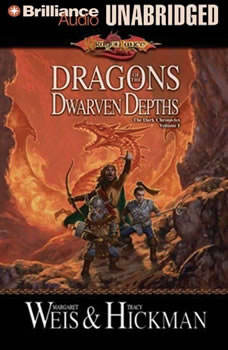 Dragons of the Dwarven Depths: The Lost Chronicles, Volume I

The Companions are back in the first volume that features an untold story from the War of the Lance. The beloved heroes return: Tanis, Raistlin and Caramon, Sturm Brightblade, Tasslehoff, and Flint Fireforge. Old friends, such as Riverwind and Goldmoon and Laurana travel with them. Old enemies are here too, as the companions encounter new adventures and new dangers in the very beginning months of the War of the Lance.This audiobook starts with the celebration of a wedding. The companions believe they have slain the evil Dragon Highlord Verminaard. They have rescued the refugees from Pax Tharkas and taken them to a valley in the Kharolis mountains.After they are attacked by the Dragon Armies, Tanis and Flint are sent to search for the long lost dwarven kingdom of Thorbardin, hoping to persuade the dwarves to give the refugees shelter for winter.Each of the other companions face their own trials. Raistlin remembers that, according to tales of old, the key to Thorbardin lies in the haunted fortress known as Skullcap. The others want nothing to do with this accursed place, but Raistlin feels strangely drawn to the ruins, and he persuades a reluctant Caramon to accompany him there.Sturm becomes obsessed with finding the legendary Hammer of Kharas, and his obsession nearly plunges the party into disaster. Riverwind, now chieftain of his tribe, is made the reluctant leader of the refugees and worries that he is not suited for the task. Tika Waylan must decide if she has the courage to undertake a perilous journey to save those she loves from certain death, while Tanis Half-Elven wrestles with his faith in the newly returned gods.It is the dwarf, Flint Fireforge, who faces the most crucial test. As the heroes race against time to save the lives of the innocents dependent on them, Flint is forced to make a difficult choice, one on which the future of mankind may rest. And the only one he can depend on for help is the happy-go-lucky kender, Tasslehoff Burrfoot.For a time, it seems they have found a safe haven in the dwarven kingdom, only to discover there is no safe place anywhere in this world, as the Queen of Darkness and her dragons set the land aflame.

Dragons of the Dwarven Depths: The ...
Lost Chronicles Trilogy #1