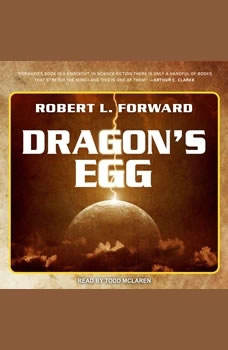 In a moving story of sacrifice and triumph, human scientists establish a relationship with intelligent lifeforms—the cheela—living on Dragon's Egg, a neutron star where one Earth hour is equivalent to hundreds of their years. The cheela culturally evolve from savagery to the discovery of science, and for a brief time, men are their diligent teachers.

The future is here...in an adventure of cosmic dimension.In December, 1999, a multinational team journeys out to the stars, to the most awesome encounter in human history. Who -- or what -- is out there? In Cosmos, Carl Sagan explained the universe....

Red Schuhart is a stalker, one of those young rebels who are compelled, in spite of extreme danger, to venture illegally into the Zone to collect the mysterious artifacts that the alien visitors left scattered around. His life is dominated by the pl...

The future is here...in an adventure of cosmic dimension.In December, 1999, a multinational team journeys out to the stars, to the most awesome encounter in human history. Who -- or what -- is out there? In Cosmos, Carl Sagan explained the universe....

We are not alone. Millions of people are confronting aliens that authorities say do not exist.Meet the Three Thieves, a group of Grays assigned to duty in a small Kentucky town. They have been preparing a child for generations. Innocent Conner Calla...

With The Three-Body Problem, English-speaking listeners got their first chance to experience the multiple-award-winning and bestselling Three-Body Trilogy by China's most beloved science fiction author, Cixin Liu.Three-Body was released to great acc...

Across America a mysterious disease is turning ordinary people into raving, paranoid murderers who inflict brutal horrors on strangers, themselves, and even their own families. Working under the government’s shroud of secrecy, CIA operative De...

This near-future trilogy is the first chance for English-speaking listeners to experience this multiple-award-winning phenomenon from Cixin Liu, China's most beloved science fiction author. In The Dark Forest, Earth is reeling from the revelation of...

Now available as a value-priced edition!Melanie Stryder refuses to fade away. The earth has been invaded by a species that take over the minds of their human hosts while leaving their bodies intact, and most of humanity has succumbed.Wanderer, the ...

The Three-Body Problem is the first chance for English-speaking readers to experience the Hugo Award-winning phenomenon from China's most beloved science fiction author, Liu Cixin.Set against the backdrop of China's Cultural Revolution, a secret mil...