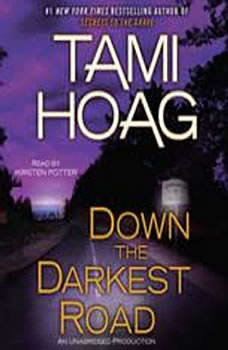 Down the Darkest Road

#1 New York Times bestselling author Tami Hoag returns with the latest entry in her riveting Oak Knoll series.
Deeper Than the Dead introduced Tami Hoag's millions of fans to Oak Knoll, a small California town that, in the mid-eighties, seemed as idyllic as any . . . until the See-No-Evil killer shattered that notion. It took FBI agent Vince Leone and a new technique called "profiling" to put an end to the trauma.
Secrets to the Grave brought Leone's teacher-turned-child- advocate wife, Anne, into a central role. Together with Vince and local sheriff 's deputy Tony Mendez, she solved an Oak Knoll murder with a particularly challenging mystery: The victim never existed.

And now Hoag returns once more to Oak Knoll for the third installment of this bestselling series. Through Leone's pioneering, science-based investigatory skills, Hoag explores the early days of forensic police work. And through the chilling case at the heart of Down the Darkest Road, she hooks ever more readers into the meticulously crafted, all-too-terrifying world of Oak Knoll, where the scariest secrets of all can be found . . . Down the Darkest Road.