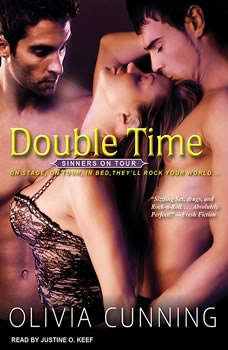 After falling head over heels in love with Reagan Elliot, the perfect woman for him, Sinners' rhythm guitarist, Trey Mills, vows to give up his bisexual ways forever.  When an obsessed fan threatens Reagan, she hires her friend, Ethan, to protect her while on tour.  Falling for his girlfriend's bodyguard, a guy, was never on Trey's agenda. Will he have to choose between them, or can he have the best of both worlds?

When Jace walked through the doors of Aggie's dungeon, the last thing he expected was to find self-forgiveness and the love of a remarkable woman. But when a terrible accident sidelines Jace during the band's tour, the burdensome chains of his past ...