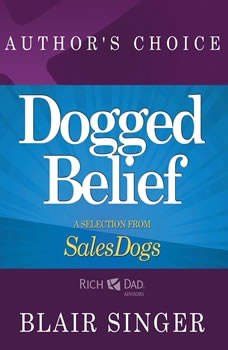 Do you know the four winning mindsets of champions?A selection from the bestselling RICH DAD ADVISORS: SALES DOGS.

A lively and practical guide to sell anything and up your business game from one of the top realtors in the world and costar of Bravo's Million Dollar Listing: New York and Sell It Like Serhant."Ryan is not only charming and hilarious, he could sel...

The Psychology of Selling
by Brian Tracy

Brian Tracy, one of the top professional speakers and sales trainers in the world today, found that his most important breakthrough in selling was the discovery that it is the "Psychology of Selling" that is more important than the techniques and me...

The Little Red Book of Selling
by Jeffrey Gitomer

Join a new generation of listeners who have discovered the groundbreaking new V-Book™ format, brought to you by Simon & Schuster Audio and Jeffrey Gitomer, as a powerful and flexible new technology for improving your life and your career. ...

The Best Damn Sales Book Ever
by Warren Greshes

There are an endless number of sales books that purport to let the reader in on the secrets of great selling. And many of them even have useful ideas and tips. But it doesn't matter how many tricks a salesperson has at hand if he or she doesn't have...

The Way of the Wolf
by Jordan Belfort

Jordan Belfort—immortalized by Leonardo DiCaprio in the hit movie The Wolf of Wall Street—reveals the step-by-step sales and persuasion system proven to turn anyone into a sales-closing, money-earning rock star.For the first time ever, J...

The Challenger Sale
by Matthew Dixon

What's the secret to sales success? If you're like most business leaders, you'd say it's fundamentally about relationships-and you'd be wrong. The best salespeople don't just build relationships with customers. They challenge them. The need to...

The Lost Art of Closing
by Anthony Iannarino

For decades, sales managers, coaches, and authors talked about closing as the most essential, most difficult phase of selling. They invented pushy tricks for the final ask, from the 'take delivery' close to the 'now or never' close. But these tacti...

If You're Not First, You're Last
by Grant Cardone

During economic contractions, it becomes much more difficult to sell your products, maintain your customer base, and gain market share. Mistakes become more costly, and failure becomes a real possibility for all those who are not able to make the tr...

Now available on CD and audio download! A business classic endorsed by Dale Carnegie, How I Raised Myself from Failure to Success in Selling is for anyone whose job it is to sell. Whether you are selling houses or mutual funds, advertisements or ide...