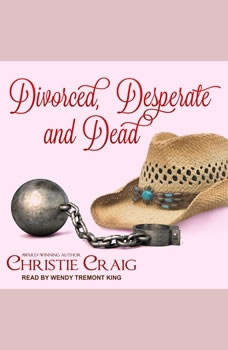 After a disastrous marriage and divorce, Detective Cary Stevens vowed he'd never let another woman into his heart. But when his latest investigation puts him in the way of a bullet, his bachelor days—and one-night stands—may be numbered. On the brink of death, he finds himself in Room Six, a waiting room in the hereafter where in-betweeners' fates are truly decided. He resigns himself to dying of boredom, if nothing else, in the lineup of senior citizens with their AARP magazines, when in walks the one woman who could make him want a second chance at life . . . and love. Chloe Sanders learns the hard way that no good deed goes unpunished when she pushes a little girl out of the way of a moving car and wakes up in some type of purgatory. Or maybe it's heaven, because she couldn't have asked for a hotter guy with whom to await her final judgment. The sweeping glances of his bedroom eyes and sharp-tongued flirtatiousness tell her Cary's certainly no angel, but is he real? When she finally wakes up, Chloe's determined to find out if he's truly a man of magnificent flesh and blood or just a figment of her imagination. But before she can track him down, will the murderer that first put them both in Room Six come back to finish the job?

Shacking Up
by Helena Hunting

Ruby Scott is months behind on rent and can’t seem to land a steady job. She has one chance to turn things around with a big audition. But instead of getting her big break, she gets sick as a dog and completely bombs it in the most humiliating...

A delicious, sexy, laugh-out-loud modern romance about a newly single woman and her journey to find love again, from New York Times bestselling author Alice Clayton and debut author Nina Bocci.Avery Bardot steps off the plane in Rome, looking for a ...

The New York Times bestselling author of Pucked and The Good Luck Charm delivers a Hollywood happily-ever-after where a famous heartthrob falls for his ultimate fangirl in this sexy standalone romantic comedy. Amazon's choice for "Best Romance of A...

The Royal Treatment
by Melanie Summers

For fans of Bridget Jones and The Princess Diaries comes a laugh-out-loud, feel-good comedy with a sizzling side of romance . . . Ultra-private, ridiculously handsome Crown Prince Arthur has always gotten by on his charm. But that won't be enough n...

Love and Other Words
by Christina Lauren

The heart may hide, but it never forgets. The first women’s fiction novel from New York Times and #1 international bestselling author Christina Lauren (Autoboyography, Dating You / Hating You).Macy Sorensen is settling into an ambitious if emo...

For two sworn enemies, anything can happen during the Hawaiian trip of a lifetime—even love—in this witty and swoonworthy romance from the New York Times bestselling duo who “hilariously depict modern dating” (Us Weekly) and ...

I sold my soul for a hamburger. And I have no regrets. When a girl is trapped indefinitely in an elevator with a smoking hot burger and an empty stomach, even the strongest of women will crumble. The story goes like this: Bradley Hamilton, former ...

Fall in love with this hilarious and heartwarming romantic comedy that USA Today bestselling author LJ Shen calls "an absolute treat."Kristen Peterson doesn't do drama, will fight to the death for her friends, and has no room in her life for guys w...

Lily and the Octopus
by Steven Rowley

Named to the American Library Association’s Reference & User Services (RUSA) Listen List! Combining the emotional depth of The Art of Racing in the Rain with the magical spirit of The Life of Pi, Lily and the Octopus is an epic adventure of th...