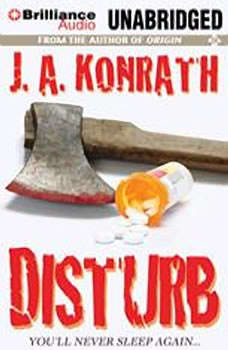 A medical investigator tormented by secret guilt.A beautiful doctor with an illicit desire.A millionaire businessman indulging a passion for murder. And a human guinea pig who has been awake for seven straight weeks. Disturb by JA KonrathYou’ll never sleep well again...It's the pharmaceutical breakthrough of the millennium. DruTech Industries proudly presents N-SOM, a pill that completely replaces eight hours of sleep. Feel totally refreshed, both physically and mentally, in just fifteen minutes a night. The profit potential is boundless. Mankind's productivity will go through the roof. One third of a person's life could be recovered, for only ten dollars a dose. The FDA sends CDER agent Dr. Bill May to green light N-SOM for American use. The pressure, both political and monetary, is tremendous. But Bill soon harbors fears that N-SOM may not be as safe as early reports indicate...After meeting brilliant inventors Dr. Nikos Stefanopolous and his beautiful daughter Theena, Bill stumbles into an insidious cover-up that hinges on Emmanuel Tibbets, a human guinea pig who hasn't had a wink of sleep in over fifty days. Bill's investigation soon unearths a snarled tangle of extortion, conspiracy, taboo sex, hidden secrets, and murderous betrayal. When N-SOM's deadly side-effects are revealed, along with the shocking truth of how the drug is produced, Bill and Theena find themselves on the run from hired assassins, three letter government agencies, and a breed of psychopath unlike any ever known. Billions of dollars, and billions of lives, are at stake. Can Bill and Theena survive long enough to expose the truth? Or will the world succumb to an evil that may bring about the extinction of mankind? This audiobook version also includes the bonus horror short story, "Dear Diary," about a very special pom pon girl.