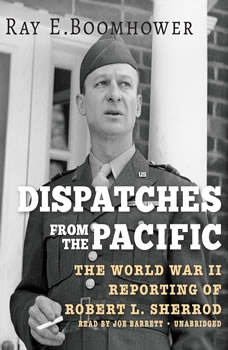 Dispatches from the Pacific: The World War II Reporting of Robert L. Sherrod

In the fall of 1943, armed with only his notebooks and pencils, Time and Life correspondent Robert L. Sherrod leapt from the safety of a landing craft and waded through neck-deep water and a hail of bullets to reach the shores of the Tarawa atoll with the US Marine Corps.Living shoulder to shoulder with the marines, Sherrod chronicled combat and the marines day-to-day struggles as they leapfrogged across the Central Pacific, battling the Japanese on Tarawa, Saipan, Iwo Jima, and Okinawa. While the marines courageously and doggedly confronted an enemy that at times seemed invincible, those left behind on the American home front desperately scanned Sherrods columns for news of their loved ones.After Sherrods death in 1994, the Washington Post heralded his reporting as some of the most vivid accounts of men at war ever produced by an American journalist. Now, for the first time, Ray E. Boomhower tells Sherrods story in this intimate account of thePacific front war efforts.