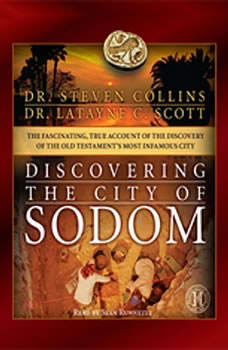 Discovering the City of Sodom: The Fascinating, True Account of the Discovery of the Old Testament's Most Infamous City

The fascinating, true account of the quest for one of the Old Testament’s most infamous cities. Like many modern-day Christians, Dr. Steven Collins struggled with what seemed to be a clash between his belief in the Bible and the research regarding ancient history—a crisis of faith that inspired him to put both his education and the Bible to the test by embarking on an expedition that has led to one of the most exciting finds in recent archaeology. Recounting Dr. Collins’s quest for Sodom in absorbing detail, this adventure-cum-memoir reflects the tensions that define Biblical archaeology as it narrates a tale of discovery. The book follows Dr. Collins as he tracks down Biblical, archaeological, and geological clues to the destruction of Sodom and Gomorrah, narrowing down the list of possible sites as he weighs evidence and battles skeptics. Finally, he arrives at a single location that looms as the only option: a massive site called Tall el-Hammam in the Hashemite Kingdom of Jordan. Challenging the assumptions of academics around the world, Discovering the City of Sodom may well inspire a revision of the history books. Dr. Collins has become a new voice in the controversy over using the Bible as a credible source of understanding the past—and opened a new chapter in the struggle over the soul of Biblical archaeology.