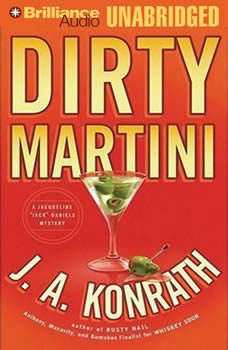 In Whiskey Sour, Chicago police Lieutenant Jacqueline "Jack" Daniels hunted down a killer dubbed "The Gingerbread Man."In Bloody Mary, she busted a psychopath with a penchant for dismemberment.In Rusty Nail, it was a serial killer with a doozy of a family tree.And now, in Dirty Martini, Jack faces her toughest adversary yet: a sicko who's poisoning the city's food supply. But that's just the start of what he has planned, because he's aiming to kill fifty thousand people in the single biggest act of terrorism the US has ever seen. Can she stop him—and decide whether to accept boyfriend Latham's surprise proposal—without destroying both her reputation and her sanity?Join Jack, her partner Herb, and her nemesis Harry McGlade, for her fourth, and greatest, case so far.