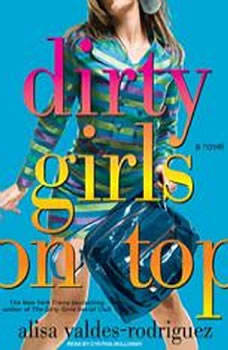 The Sucias are back in this sexy showstopper of a novel from the bestselling author of The Dirty Girls Social Club. In Dirty Girls on Top, the Sucias are five years older, five times as much fun—but, sad to say, maybe not five times wiser. Lauren is at the top of her game as a columnist for the Boston Herald but still hasn't figured out how to pick a guy—or how to eat (and not eat) like a healthy person. And Usnavys is still sashaying all over town, all 260 pounds of her dolled up in designer duds and ready for action—action from anyone except her husband, Juan, who has become just the littlest bit boring staying home taking care of the house and baby Carolina. Maybe the other Sucias could help Lauren and Usnavys—that is, if they didn't have so many of their own messes to deal with. Ella magazine founder Rebecca has just found out that her picture-perfect marriage may not yield any children. Sara may be the star of her own decorating show on television, but her dangerous pull toward her ex-husband Roberto isn't so pretty. Amber keeps renaming herself, hoping that that's enough to keep the public interested in her music. And Elizabeth is discovering that a relationship with another woman takes more than being out and proud. Most of all, Dirty Girls on Top is all about sex and love—getting it, not getting it, yearning for it, having it with the wrong person, fighting it from the right person, trying it a new way, giving up on it, and, in the end, if your fingers are crossed, having it come out just the way it should.

Mercury in Retrograde
by Paula Froelich

Penelope Mercury, an intrepid reporter at the New York Telegraph, has pounded the pavement for five years from city borough to borough, carrying out her boss's eccentric orders to break stories that seem inconsequential to everyone but him. Finally,...

You're the Only One I Can Tell
by Deborah Tannen

O's Little Book of Love and Friendship
by O, The Oprah Magazine

An evocative and heartwarming collection of essays and anecdotes from great writers and celebrated thinkers, O's Little Book of Love & Friendship will captivate anyone whose life has ever been touched by a lasting friendship or an unforgettable roma...

Discover the unexpected ways friends influence our personalities, choices, emotions, and even physical health in this fun and compelling examination of friendship, based on the latest scientific research and ever-relatable anecdotes. Why is dinner ...

Like most mothers, Amy Reynolds has anticipated the moment when her son brings home his first serious girlfriend. But when he does, she’s shocked to meet the girl’s father. He is none other than Nick Lowry – the college boyfriend w...

Life is Friends
by Jeanne Martinet

With an attitude that's savvy, sympathetic, and delightfully down-to-earth, Jeanne Martinet gives you the game plan for relearning the lost art of socializing. Forget texting, IM'ing, Facebook, and Internet "relationships". When it comes to building...

How to Win Friends: The Ultimate Guide To Make Friends and Influence People
by Gary P. Bear

“Friendship is a priceless treasure never to be bought or sold – it can only be cherished”.~UnknownTrue and lasting friends are priceless! They are the people who you trust with your innermost secrets and know they will be there i...

Before arriving at Oberlin in 1973, Clare Mann had never met anyone like Sally Rose. Rich and beautiful, Sally is utterly foreign to a middle-class, Midwestern Protestant like Clare—and utterly fascinating. The fascination only grows when Sall...

When Rachel Bertsche first moves to Chicago, she’s thrilled to finally share a zip code, let alone an apartment, with her boyfriend. But shortly after getting married, Bertsche realizes that her new life is missing one thing: friends. Sure, sh...