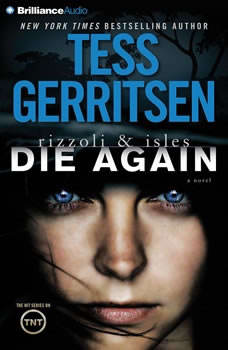 The latest enthralling case in Tess Gerritsen's New York Times bestselling Rizzoli & Isles series, the blockbuster books behind the smash hit TNT series.Boston Detective Jane Rizzoli is on the case of a big game hunter found dead in his apartmen...

Every Fifteen Minutes
by Lisa Scottoline

Dr. Eric Parrish is the Chief of the Psychiatric Unit at Havemeyer General Hospital outside of Philadelphia. Recently separated from his wife Alice, he is doing his best as a single Dad to his seven-year-old daughter Hannah. His work seems to be goi...

New York Times-bestselling author Robin Cook takes on the ripped-from-the-headlines topic of harnessing DNA from ancestry websites to catch a killer in this timely and explosive new medical thriller.When the body of twenty-eight-year-old social work...

With his signature blend of suspense and science, Robin Cook delivers an electrifying page-turner that delves into the murky ethics of developing genomic medicine and modern-day health care.From the Paperback edition.

The New York Times–bestselling author and master of the medical thriller returns with a top-notch fusion of groundbreaking medical science and edge-of-your-seat suspense. George Wilson, M.D., a radiology resident in Los Angeles, is a...

When Dr. Craig Bowman is served with a summons for medical malpractice, he's shocked, enraged, and more than a little humiliated. A devoted physician who works continuously in the service of others, he endured grueling years of training and is now a...