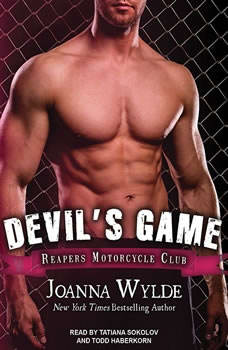 Liam "Hunter" Blake hates the Reapers MC. Born and raised a Devil's Jack, he knows his duty. He'll defend his club from their oldest enemies—the Reapers—using whatever weapons he can find. But why use force when the Reapers' president has a daughter who's alone and vulnerable? Hunter has wanted her from the minute he saw her, and now he has an excuse to take her. Em has lived her entire life in the shadow of the Reapers. Her overprotective father, Picnic, is the club's president. The last time she had a boyfriend, Picnic shot him. Now the men in her life are far more interested in keeping her daddy happy than showing her a good time. Then she meets a handsome stranger—a man who isn't afraid to treat her like a real woman. One who isn't afraid of her father. His name is Liam, and he's The One. Or so she thinks.

As Reapers Motorcycle Club president, Reese "Picnic" Hayes has given his entire life to the club. After losing his wife, he knew he'd never love another woman. These days, Reese keeps his relationships free and easy—he definitely doesn't want ...

Dare to Love
by Jaci Burton

Lucy Fairchild is a confident, successful lawyer and heiress to the Fairchild fortune. Her father thinks he can choose who she'll marry, which Lucy finds ridiculous. She might be thirty and still single, but she's perfectly capable of finding her ow...

Waking up in Vegas was never meant to be like this.Evelyn Thomas's plans for celebrating her twenty-first birthday in Las Vegas were big. Huge. But she sure never meant to wake up on the bathroom floor with a hangover to rival the black plague, a ve...

Stay up all night with the sexy rockers in Stage Dive, the epic New Adult series from New York Times bestselling author Kylie Scott, author of Lick and Play.Can rock n' roll's most notorious bad boy be tamed by love?As the lead singer of Stage Dive,...

Kylie Scott returns with the highly anticipated follow-up to international bestseller Lick.Mal Ericson, drummer for the world famous rock band Stage Dive, needs to clean up his image fast—at least for a little while. Having a good girl on his ...

Don't miss a beat with the fourth and final novel in the New York Times and USA Today bestselling Stage Dive series from Kylie Scott.One by one, the members of Stage Dive are falling in love. David, Mal, and Jimmy have all taken the plunge, and now ...

MORE THAN 100 MILLION COPIES SOLD WORLDWIDESOON TO BE A MAJOR MOTION PICTUREWhen unworldly student Anastasia Steele first encountered the driven and dazzling young entrepreneur Christian Grey it sparked a sensual affair that changed both of their li...