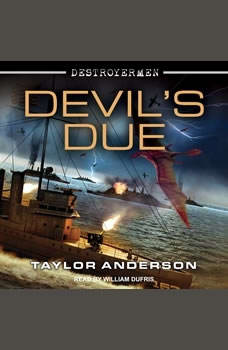 Taylor Anderson continues his powerful New York Times bestselling series of alternate history and military strategy, as the conflict is about to become terrifyingly personal . . . Captain Matt Reddy and the crew of the USS Walker have been fighting for their lives ever since their ship was swept from the Pacific to another world and they became embroiled in a deadly conflict between their Lemurian allies and the ravening Grik. But things are about to get worse. With Reddy's family and allies held prisoner by the mad General Kurokawa, the mysterious League and evil Dominion plotting schemes of their own, and the Grik trying to build their swarm and concentrate power, Reddy faces danger on all sides. Although desperate to confront Kurokawa, Captain Reddy fears he's subordinating the war effort for personal reasons. But Kurokawa is too dangerous to be left alone. With the mighty League battleship Savoie at his command, he plots a terrible vengeance against Reddy and his tiny, battered destroyer. The stage is set for a devastating cataclysm, and Reddy and his allies will have to risk everything to protect what they hold dear.

On December 7, 1941, the Japanese launched an attack against U.S. naval forces stationed in Pearl Harbor, Hawaii. But what if the Japanese followed up their air assault with an invasion and occupation of Hawaii? This is the question explored by Harr...

River of Bones
by Taylor Anderson

The crew of a WWII destroyer face their greatest challenge yet as they try to survive in a strange new world in the next thrilling book in the New York Times bestselling series. Commander Matt Reddy and his crew are afraid it may finally be the end...

At the bloody height of World War II, the deadliest enemies in all of human history were forced to put aside their hatreds and unite against an even fiercer foe: a seemingly invincible power bent on world domination. With awesome technology, the a...

From "the master of alternate history" comes a new trilogy that reimagines a mid-twentieth century in which General MacArthur, without bothering to consult President Truman, detonates nuclear warheads in several Manchurian cities after China enters ...

Not just another science audiobook and not just another Discworld novella, The Science of Discworld is a creative, mind-bending mash-up of fiction and fact, that offers a wizard’s-eye view of our world that will forever change how yo...

The Ancient Maya
by My Ebook Publishing House

“The Ancient Maya” creates a portrait of life in the ancient Mayan civilization. Describes the history, language, social classes, customs, culture, religion, and warfare of the ancient civilization of the Mayas. Easy to read and very int...

No one could stop them—not Stalin, not Togo, not Churchill, not Roosevelt... The invaders had cut the United States virtually in half at the Mississippi, vaporized Washington, D.C., devastated much of Europe, and held large parts of the Sovie...

Set in the same universe as the Worldwar series, the Colonization series brings us to Earth in the 1960s, where four superpowers rule: the United States, Russia, Nazi Germany, and the aliens of the Race. The arrival of the aliens shot Earth technol...