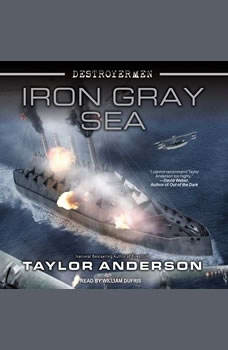 In Taylor Anderson's acclaimed Destroyermen series, a parallel universe adds an extraordinary layer to the drama of World War II. Now, Lieutenant Commander Matthew Reddy, the crew of the U.S.S. Walker, and their allies battle an ever-growing host of enemies across the globe in a desperate battle for freedom . . .War has engulfed the other earth. With every hard-won victory and painful defeat, Matt Reddy and the Allies encounter more friends—and even more diabolical enemies. Even, at last, in the arms of the woman he loves, there is little peace for Reddy.  The vast sea, and the scope of the conflict, have trapped him too far away to help on either front, but that doesn't mean he and Walker can rest. Cutting short his "honeymoon," Reddy sails off in pursuit of  Hidoiame , a rogue Japanese destroyer that is wreaking havoc in Allied seas. Now that Walker is armed with the latest "new" technology, he hopes his battle-tested four-stacker has an even chance in a straight-up fight against the bigger ship—and he means to take her on. Elsewhere, the long-awaited invasion of Grik "Indiaa" has begun, and the Human-Lemurian Alliance is pushing back against the twisted might of the Dominion. The diplomatic waters seethe with treachery and a final, terrible plot explodes in the Empire of New Britain Isles.  Worse, the savage Grik have also mastered "new" technologies and strategies. Their fleet of monstrous ironclads—and an army two years in the making—are finally massing to strike . . .