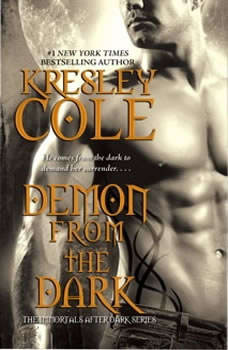 Demon from the Dark

From New York Times bestselling author Kresley Cole comes this scorching tale of a demon outcast poisoned with vampire blood and the vulnerable young witch he vows to protect—even from himself. A DANGEROUS DEMON SHE CAN’T RESIST . . . Malkom Slaine: tormented by his sordid past and racked by vampiric hungers, he’s pushed to the brink by the green-eyed beauty under his guard. A MADDENING WITCH HE ACHES TO CLAIM . . . Carrow Graie: hiding her own sorrows, she lives only for the next party or prank. Until she meets a tortured warrior worth saving. TRAPPED TOGETHER IN A SAVAGE PRISON . . . In order for Malkom and Carrow to survive, he must unleash both the demon and vampire inside him. When Malkom becomes the nightmare his own people feared, will he lose the woman he craves body and soul?

Demon from the Dark
Immortals After Dark #10