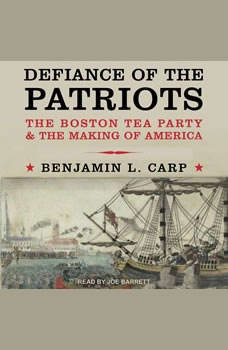 Defiance of the Patriots: The Boston Tea Party and the Making of America

On the evening of December 16, 1773, a group of disguised Bostonians boarded three merchant ships and dumped more than forty-six tons of tea into Boston Harbor. The Boston Tea Party, as it later came to be known, was an audacious and revolutionary act. It set the stage for war and cemented certain values in the American psyche that many still cherish today. But why did the Tea Party happen? Whom did it involve? What did it mean? The answers to these questions are far from straightforward. In this thrilling book, Benjamin L. Carp tells the full story of the Tea Party—exploding myths, exploring the unique city life of Boston, and setting this extraordinary event in a global context. Bringing vividly to life the diverse array of people and places that the Tea Party brought together—from Chinese tea-pickers to English businessmen, Native American tribes, sugar plantation slaves, and Boston's ladies of leisure—Carp illuminates how a determined group shook the foundations of a mighty empire, and what this has meant for Americans since. As he reveals many little-known historical facts and considers the Tea Party's uncertain legacy, he presents a compelling and expansive history of an iconic event in America's tempestuous past.