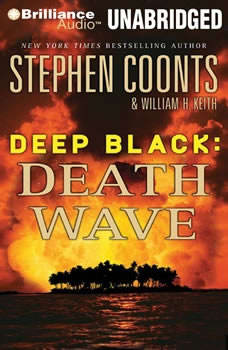 Off the coast of Africa lie the beautiful Canary Islands, a resort destination of millionaires. Underneath this idyllic paradise is one of the most volatile fault lines in the world. There, an alliance between radical Islamic terrorists and a rogue element of the Chinese government is planning to unleash an act of unimaginable geological terrorism that could devastate the U.S. East Coast, striking it with waves up to a thousand feet high. They plan to set off nuclear devices to precipitate a gigantic landslide that will send a death-dealing tsunami across the Atlantic. In the Central Asian Republic of Tajikistan, twelve nuclear warheads stolen by the Russian Mafia are about to be smuggled out of the country and delivered into the hands of the conspirators. Charlie and Ilya go on an intercept mission, but before they can retrieve them, the weapons vanish. Meanwhile, in a hotel in New Jersey, a bestselling author is assassinated to prevent the release of his stranger-than-fiction story about an Islamic plot to change the course of history. Lia, Charlie’s girlfriend, is sent to Berlin to infiltrate the empire of a ruthless Chinese billionaire whose machinations have come to the attention of the NSA. She risks immediate execution if her true identity is revealed. Their paths all converge in the Canary Islands. Unless the Deep Black team intervenes, the islands could be the epicenter of an apocalypse, with millions of lives and the entire world order at stake.