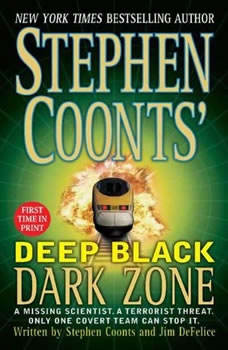 Dark Fear In a secluded headquarters on the other side of the globe, a terrorist mission is underway – a plan to set off an underwater explosion so great, and with such hellish force, that it could shift the very foundation of the earth’s surface, causing untold calamity and world-wide disaster. The terrorists call it “God’s Revenge.” Dark Weapon A nuclear warhead has gone missing. Small in size, it packs up to ten times the kilotons that exploded over Hiroshima. It’s now in the wrong hands, ready to detonate a world war of unfathomable proportions. Dark Zone In the top-secret headquarters of the National Security Agency, a small cadre of special agents form Deep Black, designed to bring a techno-edge to covert operations and eliminate the cyber-threats to world peace. This is Charlie Dean’s world – an NSA ex-Marine sniper now enlisted to stop the unthinkable. But when his suspicions of a traitor in his shadow become frighteningly true, Dean’s race against time could mean the end of the free world. “READERS KNOW THEY CAN COUNT ON COONTS.” — *Midwest Book Review “[Coonts] is a natural storyteller [with] a rare gift.” — USA Today “Coonts delivers some of his best gung-ho suspense writing yet.” — Kirkus Reviews