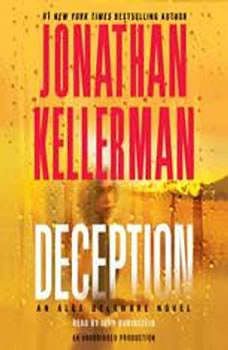 Masterly storytelling and expert insight into the darkest of human compulsions make #1 New York Times bestselling author Jonathan Kellerman’s Alex Delaware novels as compelling as they are addictive. And just when you think he has taken his spellbinding tales of mystery and psychological suspense to the limit, with Deception he takes a bold leap into terrifying and uncharted new territory.

Her name is Elise Freeman, and her chilling cry for help—to whoever may be listening—comes too late to save her. On a DVD found near her lifeless body, the emotionally and physically battered woman chronicles a year-and-a-half-long ordeal of monstrous abuse at the hands of three sadistic tormentors. But even more shocking than the lurid details is the revelation that the offenders, like their victim, are teachers at one of L.A.’s most prestigious prep schools. With Elise now dead by uncertain means, homicide detective Milo Sturgis is assigned to probe the hallowed halls of Windsor Prep Academy. And if ever he could use Dr. Alex Delaware’s psychological prowess, it’s now.

From the get-go, this case promises to be an uphill climb for truth and a down and dirty fight for justice. Allegations of rape, assault, and possibly murder at this esteemed institution renowned for molding Ivy Leaguers make for a social and political time bomb—especially given that one of the students has connections high up in City Hall. As the scandal-conscious elite of L.A. close ranks around Windsor Prep, Alex and Milo must penetrate the citadel of wealth and scholarship to expose the hidden anguish, dirty secrets, and deadly sins festering among society’s manor-born. But power and position are not easily surrendered, for that’s when the best and the brightest turn brutal and ugly. Searching for predators among the privileged, Alex and Milo may well be walking into a highly polished death trap.