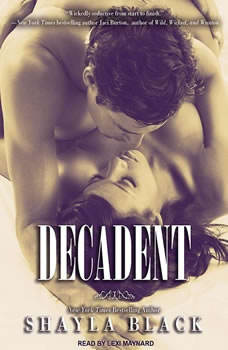 How can a virgin seeking happily ever after with a hot pop star who has a penchant for threesomes win her fantasy man? Kimber Edgington desperately needs a plan to convince Jesse McCall, who's been her friend and secret crush since they spent a summer together as teenagers, that they are meant for each other. But all the tabloid stories about his sexual escapades make her feel oh so inadequate.Determined to prove she's woman enough for Jesse, Kimber turns to bodyguard Deke Trenton for sexual education. Bold and brash, Deke warns Kimber that playing with him is playing with fire. But he can't bear to imagine the innocent beauty in someone else's arms. So Deke and his super sexy cousin, Luc, take Kimber under their wings and dangerously close to the edge of ecstasy. Though she's saved herself for Jesse, Kimber soon learns he's not the man adept at stroking her aching, endless need. That's Deke, and he can't resist when Kimber begs for more—and more . . .

Can one man sleep his way through the alphabet?Here’s the wager—it’s as easy as A-B-C. Make love to twenty-six women across the alphabet, from “Abigail” to “Zelda.” Our hero beds divas and debutantes, play...

It was good but... some of the scenes with Deke left me wondering why a girl would still want a mna who was such a jerk to her. I don't know if I still would be attracted to a man who spoke and made me feel low like this character brutally did. In the end it did turn out better and I like the story.

HAVING NEVER READ ANYTHING FROM THIS AUTHOR BEFORE, I DIDN'T REALLY KNOW IF I WOULD BECOME A FAN OR NOT. BUT THIS BOOK WAS WELL WRITTEN.

I wanted to try this book because it received a lot of good reviews, but it wasn't for me. There was too much sex, and I didn't like reading about menage. I will try Shayla's other book Wicked Ties.

Surrender to Me
Wicked Lovers #4