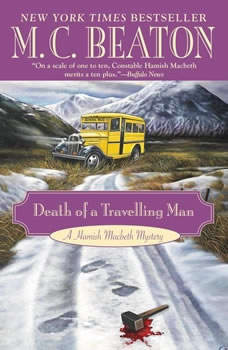 Death of a Traveling Man

Lochdubh constable Hamish Macbeths life is going to pot. He hashorrors!been promoted, his new boss is a dunce, and a self-proclaimed traveler named Sean and his girlfriend have parked their rusty eyesore of a van in the middle of the village. Hamish smells trouble, and hes right, as usual. The doctors drugs go missing. Money vanishes. Neighbors suddenly become unneighborly. The tension only explodes after the itinerant Sean is found brutally beaten to death in his camper. Suspicion quickly falls on his girlfriend, but with nobody willing to talk, the canny Hamish faces the tough task of worming the facts out of the villagers. As he uncovers a bizarre story around the murdered traveler, Macbeth knows he must find the truth soonbefore the killer gets away for good. Police Sergeant Hamish Macbeths new promotion means more money, but it also means that an eager beaver of a policeman has been thrust upon him, interfering with Hamishs easygoing way of life. Fans of the lazy Hamish will delight in seeing him pitted against a zealous young officer while solving a disturbing murder.