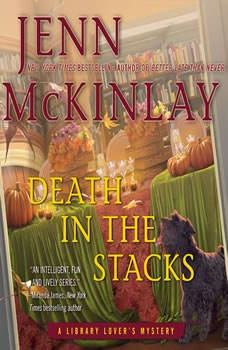 Death in the Stacks

Lindsey Norris and her staff are gearing up for the Briar Creek Library's annual Dinner in the Stacks fundraiser. The night of dinner and dancing is not only a booklover's dream - it's the library's biggest moneymaker of the year. But instead of raising funds, Olive Boyle, the new library board president, is busy raising a stink and making the staff miserable. Although Olive acts like a storybook villain, Lindsey is determined to work with her and make the event a success. But when Olive publicly threatens Paula, the library's newest hire, Lindsey cracks like an old book spine and throws Olive out of the library. The night of the fundraiser, Lindsey dreads another altercation with Olive - but instead she finds Paula crouched over Olive's dead body. Paula may have secrets, but Lindsey and the rest of the crafternooners know she's not the one who took Olive out of circulation. As the plot thickens, Lindsey must catch the real killer before the book closes on Paula's future...

Death in the Stacks
A Library Lover's Mystery

Books Can Be Deceiving
A Library Lover's Mystery

Due or Die
A Library Lover's Mystery