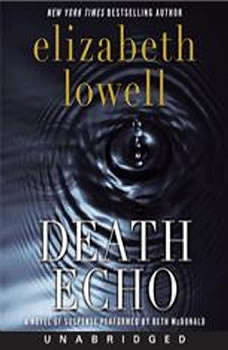 “Elizabeth Lowell has long set a standard of excellence for thrillers that never stint on either romance or suspense.”—BookPage New York Times bestselling author Elizabeth Lowell cuts a razor-sharp new edge in romantic suspense with Death Echo, a thrilling tale of passion, danger, and international intrigue. A breakneck-paced novel that unites a beautiful former CIA agent with a tough and haunted ex-Special Forces operative, Death Echo is a top-rank thriller in the vein of Iris Johansen, Tami Hoag, and Lisa Gardner—and a dazzling example of the superior storytelling that inspired author Jayne Ann Krentz to declare, “I’ll buy anything with Elizabeth Lowell’s name on it.”

The year 2060 is drawing to a close, and Thanksgiving is just around the corner. It’s a time for loved ones to come together. But sometimes the deepest hatreds seethe within the closest relationships, and blood flows faster than water….F...

Eve Dallas tracks a couple whose passion is fueled by cold brutality in this crime thriller from the #1 New York Times-bestselling author of Obsession in Death and Festive in Death.When Lieutenant Eve Dallas examines a body in a downtown Manhattan a...

Virginia Dean wakes at midnight beside a dead body, with a bloody knife in her hand and no memory of the evening’s events. Dark energy, emanating from the mirrors lining the room, overpowers her senses. With no apparent way in or out, she̵...

Two young children disappear from their East Side home in New York City, their nanny killed in cold blood. As Lieutenant Eve Dallas begins to unravel the crime scene and search for Henry and Gala MacDermit, she’s drawn into the twisted mind of...

Get 5% off your total order by adding 3 or more audiobooks from St. Kilda Consulting