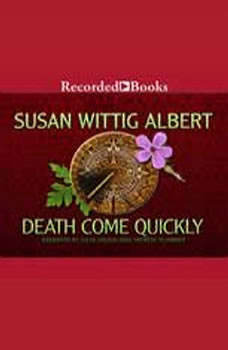 One of the most endearing and personable amateur sleuths" (Midwest Book Review), herbalist and ex-lawyer China Bayles is back. In Death Come Quickly, a friend' s murder may be the key to solving a fifteen-year-old cold case. When China' s and Ruby' s friend Karen Prior is mugged in a mall parking lot and dies a few days later, China begins to suspect that her friend' s death was not a random assault. Karen was a filmmaker supervising a student documentary about the fifteen-year-old murder of a woman named Christine Morris and the acquittal of the man accused of the crime. Is it possible that the same person who killed Christine Morris targeted Karen? Delving into the cold case, China learns the motive for the first murder may be related to a valuable collection of Mexican art. Enlisting the help of her San Antonio lawyer friend Justine Wyzinski-- aka the Whiz-- China is determined to track down the murderer. But is she painting herself into a corner from which there' s no escape? Narrators: Julia Gibson, Therese Plummer