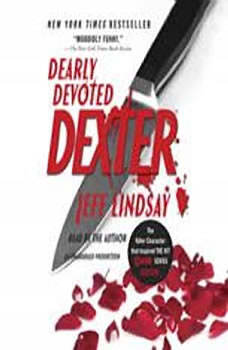 He’s a charming monster . . .
A macabre hero . . .
A serial killer who only kills bad people


Dexter Morgan has been under considerable pressure. It’s just not easy being an ethical serial killer—especially while trying to avoid the unshakable suspicions of the dangerous Sergeant Doakes (who believes Dexter is a homicidal maniac . . . which, of course, he is). In an attempt to throw Doakes off his trail, Dexter has had to slip deep into his foolproof disguise. While not working as a blood-spatter analyst for the Miami Police Department, he now spends nearly all his time with his cheerful girlfriend, Rita, and her two children, sipping light beer and slowly becoming the world’s first serial couch potato. But how long can Dexter play Kick the Can instead of Slice the Slasher? How long before his Dark Passenger forces him to drop the charade and let his inner monster run free?
In trying times, opportunity knocks. A particularly nasty psychopath is cutting a trail through Miami—a man whose twisted technique leaves even Dexter speechless. As Dexter’s dark appetite is revived, his sister, Deborah (a newly minted, tough-as-nails Miami detective) is drawn headlong into the case. It quickly becomes clear that it will take a monster to catch a monster—but it isn’t until his archnemesis is abducted that Dex can finally throw himself into the search for a new plaything. Unless, of course, his plaything finds him first . . .
With the incredible wit and freshness that drew widespread acclaim to Darkly Dreaming Dexter, Jeff Lindsay now takes Dexter Morgan to a new level of macabre appeal and gives us one of the most original, colorful narrators in years.

2nd in the Dexter series. Very good entry in the series. Dexter is being followed by Sgt Doakes, so he has to curtail his extracurricular activities, so he spends a lot more time with his girlfriend, Rita. A serial killer is involved, of course, and I hesitate to say anything in case I say too much. Laugh out loud funny is not something that is usually ***ociated with serial killers.

The narrator, Nick Landrum, does a fantastic job. The story is great. If you're a fan of the Showtime show of the same name, check this out. The stories don't overlap, but both are equally good. A warning, if you are squeemish, Dexter is NOT for you.

I started to quit listening after 10 minutes of the 1st disc, but went ahead and listened to the rest of it -- very unusual - good old Dexter wants to kill the bad guys by very slow and painful deaths - but he has no emotion ? - so what kick does he get out of killing them?? Makes Texas Chainsaw look like a birthday party.

I don't know what to say about this book, I couldn't get past the first two chapters. The reader reminded me of the guy who does the GEICO commercials, you know the one, slicked back hair Can GEICO lower your insurance? Can So & So really do Bla Bla? You know the type, Mr. Super Cool from some cheesy night club. I had to send it back...