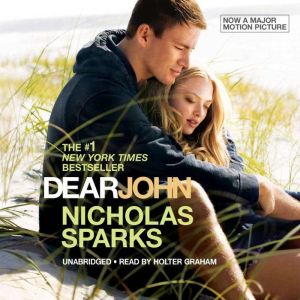 FROM THE #1 NEW YORK TIMES BESTSELLING AUTHORAn angry rebel, John dropped out of school and enlisted in the Army, not knowing what else to do with his life--until he meets the girl of his dreams, Savannah. Their mutual attraction quickly grows into the kind of love that leaves Savannah waiting for John to finish his tour of duty, and John wanting to settle down with the woman who captured his heart. But 9/11 changes everything. John feels it is his duty to re-enlist. And sadly, the long separation finds Savannah falling in love with someone else. "Dear John," the letter read...and with those two words, a heart was broken and two lives were changed forever. Returning home, John must come to grips with the fact that Savannah, now married, is still his true love--and face the hardest decision of his life.

I JUST CAN'T GET THROUGH ANY OF THIS TRIPE. IT IS SO LAME. MAYBE I FEEL THIS WAY BECAUSE I AM USED TO THE WRITING OF THOMAS HARDY AND A.J. CRONIN.

I am a really BIG Nicholas Sparks fan like I have read every book BIG. But this book was not my favorite. Maybe because of the ending...but it did have a good message about doing whatever it takes to make sure your loved one is happy.

Im a 33 year old guy and this book made me cry all the way through it. Which was kind of a problem because Id listen to it on my way to work and would show up with red eyes and puffy cheeks. I have never had to get over a book before, but it will be a while before I forget this story. Other reviewers didnt seem to get it, but this hit close to home for me in many ways. The best Sparks Ive read/listened to so far.

An absolute wonderful read. I received the book in the mail and was finished within hours of receiving it.