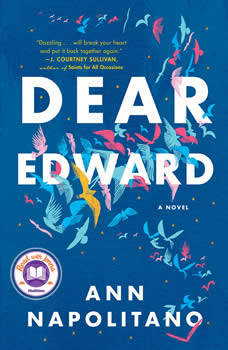 A twelve-year-old boy struggles with the worst kind of fame—as the sole survivor of a notorious plane crash—in this “stunning novel of courage and connection” (Helen Simonson, bestselling author of Major Pettigrew’s Last Stand).

“A rich, big-hearted tapestry that leaves no one behind . . . Ann Napolitano brings clear-eyed compassion to every character.”—Chloe Benjamin, bestselling author of The Immortalists

What does it mean not just to survive, but to truly live?

One summer morning, twelve-year-old Edward Adler, his beloved older brother, his parents, and 183 other passengers board a flight in Newark headed for Los Angeles. Among them are a Wall Street wunderkind, a young woman coming to terms with an unexpected pregnancy, an injured veteran returning from Afghanistan, a business tycoon, and a free-spirited woman running away from her controlling husband. Halfway across the country, the plane crashes. Edward is the sole survivor.

Edward’s story captures the attention of the nation, but he struggles to find a place in a world without his family. He continues to feel that a part of himself has been left in the sky, forever tied to the plane and all of his fellow passengers. But then he makes an unexpected discovery—one that will lead him to the answers of some of life’s most profound questions: When you’ve lost everything, how do you find the strength to put one foot in front of the other? How do you learn to feel safe again? How do you find meaning in your life?

Dear Edward is at once a transcendent coming-of-age story, a multidimensional portrait of an unforgettable cast of characters, and a breathtaking illustration of all the ways a broken heart learns to love again.

“Dear Edward made me think, nod in recognition, care about its characters, and cry, and you can’t ask more of a novel than that.”—Emma Donoghue, New York Times bestselling author of Room

“Weaving past and present into a profoundly beautiful, page-turning story of mystery, loss, and wonder, Dear Edward is a meditation on survival, but more important, it is about carving a life worth living. It is about love and hope and caring for others, and all the transitory moments that bind us together.”—Hannah Tinti, author of The Twelve Lives of Samuel Hawley and The Good Thief

An utterly wonderful debut novel of love, crime, magic, fate and a boy’s coming of age, set in 1980s Australia and infused with the originality, charm, pathos, and heart of Extremely Loud and Incredibly Close and The Curious Incident of the D...

Listen to the cult-favorite coming of age story that takes a sometimes heartbreaking, often hysterical, and always honest look at high school in all its glory. Also a major motion picture starring Logan Lerman and Emma Watson, The Perks of Being a W...