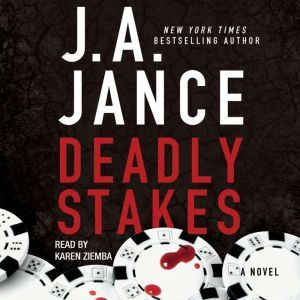 A thrilling mystery from New York Times bestselling author J.A. Jance starring Ali Reynolds, who finds herself working against the police to clear two innocent names…with deadly stakes.In Deadly Stakes, police academy-trained former reporter Ali Reynolds is contacted to investigate the grisly murder of a gold-digging divorcee on behalf of a woman accused of the crime. Lynn Martinson is dating the dead woman’s ex-husband, and she and her boyfriend Chip Ralston have been charged. Ali is simultaneously drawn to the case of A.J. Sanders, a frightened teen with secrets of his own. He’s the first to find the body in the Camp Verde desert when he goes to retrieve a mysterious buried box hidden by his absent father—a box that turns out to be filled with hundreds of thousands of dollars in poker chips. When the body of an ex-con is discovered near the first crime scene, Ali struggles to determine if A.J. and Lynn’s cases are related. Though her friends in the police department grow increasingly irritated by her involvement with the cases, Ali must stop a deadly killer from claiming another victim…before she herself is lost in this game of deadly stakes.