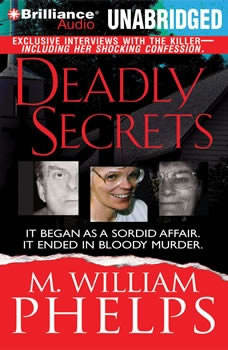 National bestselling and award-winning author M. William Phelps—star of Investigation Discovery’s smash-hit TV series Dark Minds—updates his classic work of true crime in which psychological drama, passion, and murder collide in a powerful audiobook with special appeal to women listeners.In the postcard-pretty town of Pleasant Valley, New York, Susan Fassett left choir practice at her church—and was gunned down in the parking lot. An entire town reeled in shock. Susan was a beloved wife and friend without a known enemy. Only two people knew the disturbing truth—Susan had been living a double life. Behind the picture-perfect façade of small-town America lay a hidden world of sado-masochism, lesbian affairs, betrayal, and adultery. In this updated true-crime classic, M. William Phelps brings new dimension to shocking real-life drama of secrets, lies, and murder.

Murder in the Heartland
by M. William Phelps

“The most disturbing and moving look at murder in rural America since In Cold Blood.” —Gregg OlsenOn a December night in 2004, a 911 operator in Nodaway County, Missouri, received a frantic call from a woman who’d found her p...

Vanished at Sea
by Tina Dirmann

House of Evil
by John Dean

In the heart of Indianapolis in the mid-1960's, through a twist of fate and fortune, a pretty young girl came to live with a thirty-seven-year-old mother and her seven children. What began as a temporary childcare arrangement between Sylvia Likens's...

Too Late to Say Goodbye
by Ann Rule

America's foremost true-crime writer offers her most riveting real-life drama ever: a heartbreaking story of treachery, jealousy and murder. Jenn Corbin appeared to have it all: two dear little boys, a posh home in one of the upscale suburbs of ...

An idyllic Hawaiian wedding held the promise of a wonderful future for Chris Northon, an airline pilot, a confirmed bachelor-turned-devoted family man; and Liysa, a loving mother and aspiring Hollywood screenwriter. But few, including Chris, had see...