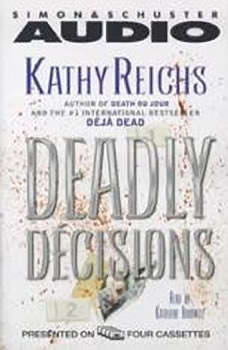 Nine-year-old Emily Anne Toussaint is shot dead on a Montreal street. A North Carolina teenager disappears from her home and parts of what may be her skeleton are found hundreds of miles away. For Dr. Temperance Brennan, a forensic anthropologist in both Montreal and North Carolina, the deaths kindle deep emotions that propel her on a harrowing journey into the world of outlaw motorcycle gangs. As a scientist, Tempe should remain dispassionate. As a caring individual, she yearns to take the killers off the streets. With her boss Pierre LaManche in the hospital, and her friend Andrew Ryan disturbingly unavailable, Tempe begins a perilous investigation into a culture where evil often wears masks. From blood-splatter patterns and ground-penetrating radar to bone-sample analysis, Deadly Decisions triumphantly combines the authenticity of a world-class forensic professional with the narrative power of a brilliant new crime-writing star in a richly nuanced thriller.