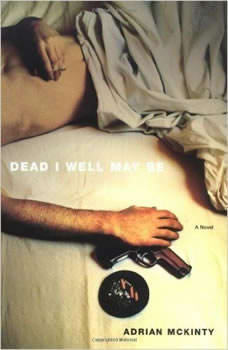 Dead I Well May Be

This Irish bad-boy thriller, set in the hardest streets of New York City, introduces us to Michael Forsythe, an illegal immigrant escaping from the Troubles in Belfast, Northern Ireland. Clever, fearless, and handy with a pistol, young Michael is just the fellow to be tapped by Darkey, a New York crime boss, to join his gang of thugs fighting for their turf. But just as Michael is being anointed Darkeys rising star, he inadvisably seduces Darkeys girl. Suddenly the tables are turned, and Darkey plans a very hard fall for young Michael. But Darkey fails to account for Michaels toughnessor his determination to wreak vengeance upon those who betray him. A natural storyteller with a gift for dialogue, McKinty delivers us a stunning new noir voice, dark and stylish, mythic and violentcomplete with an Irish lilt.

I have seen slasher moves but until I read this book I had never read a slasher novel. this book is full of blood and killing but very little plot.