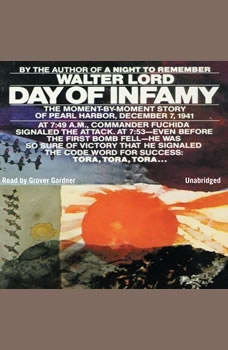 Day of Infamyis Walter Lords gripping, vivid re-creation of the Japanese attack on Pearl Harbor on Sunday, December 7, 1941. In brilliant detail Walter Lord traces the human drama of the great attack: the spies behind it; the Japanese pilots; the crews on the stricken warships; the men at the airfields and the bases; the Japanese pilot who captured an island single-handedly when he could not get back to his carrier; the generals, the sailors, the housewives, and the children who responded to the attack with anger, numbness, and magnificent courage. In compiling his masterpiece, Lord traveled over fourteen thousand miles and spoke or corresponded with over five hundred individuals on both sides who were there, creating the best account we have of one of the epic events in American history.