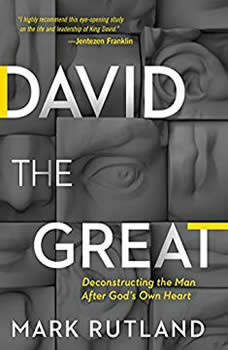 David the Great: Deconstructing the Man After God's Own Heart

KING DAVID was a complicated, conflicted man of flesh. But too often he is viewed as an Americanized shepherd boy on a Sunday school
felt board or a New Testament saint alongside the Virgin Mary. Not only does this neglect one of the Bible’s most complex stories of sin and
redemption; it also bypasses the gritty life lessons inherent in the amazing true story of David.

Mark Rutland shreds the felt-board character, breaks down the sculpted marble statue, and unearths the real David of the Bible. Both noble
and wretched, neither a saint nor a monster, at times victorious and other times a failure, David was through it all a man after God’s own heart.