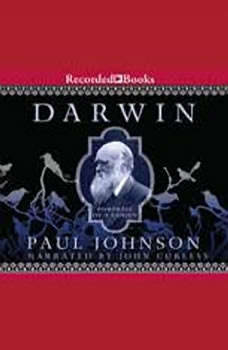 Darwin: Portrait of a Genius

Charles Darwin is arguably the most influential scientist of all time. His Origin of Species forever changed our concept of the world’s creation. Darwin’s revolutionary career is the perfect vehicle for historian Paul Johnson. Marked by the insightful observation, spectacular wit, and highly readable prose for which Johnson is so well regarded, Darwin brings the gentleman-scientist and his times brilliantly into focus. From Darwin’s birth into great fortune to his voyage aboard the Beagle, to the long-delayed publication of his masterpiece, Johnson delves into what made this Victorian gentleman into a visionary scientist—and into the tragic flaws that later led Darwin to support the burgeoning eugenics movement.

The Lost Titanic Tapes tell the story of what happened in the words of those who lived it. It is a collection of first-person exclusive accounts from the survivors of the legendary disaster who would never forget the events of those brief hours, the...

The Most Powerful Idea in the World
by William Rosen

If all measures of human advancement in the last hundred centuries were plotted on a graph, they would show an almost perfectly flat line—until the eighteenth century, when the Industrial Revolution would cause the line to shoot straight up, b...

Examining a series of El Nino-induced droughts and the famines that they spawned around the globe in the last third of the nineteenth century, Mike Davis discloses the intimate, baleful relationship between imperial arrogance and natural incident th...

The Age of Napoleon
by Will Durant; Ariel Durant

An engrossing volume on European civilization by Pulitzer Prizewinning historians Will and Ariel Durant The Age of Napoleon, the eleventh and final volume of the Story of Civilization, surveys the amazing chain of events that wrenched Europe out of...

The Pursuit of Power
by Richard J. Evans

Richard J. Evans's gripping narrative ranges across a century of social and national conflicts, from the revolutions of 1830 and 1848 to the unification of both Germany and Italy, from the Russo-Turkish wars to the Balkan upheavals that brought this...

Skeletons on the Zahara
by Dean King

A masterpiece of historical adventure, Skeletons on the Zahara chronicles the true story of twelve American sailors who were shipwrecked off the coast of Africa in 1815, captured by desert nomads, sold into slavery, and subjected to a hellish t...

Early in 1815, Louisa Catherine Adams and her young son left St. Petersburg in a heavy Russian carriage and set out on a difficult journey to meet her husband, John Quincy Adams, in Paris. She traveled through the snows of eastern Europe, down the B...

The fascinating true story of how a group of visionary attorneys helped make American business synonymous with Big Business, and Wall Street the center of the financial world The legal profession once operated on a smaller scale—folksy lawyers...

The consensus view of the Civil War-that it was first and foremost a war to restore the Union, and an antislavery war only later when it became necessary for Union victory-dies here. James Oakes's groundbreaking history shows how deftly Lincoln and ...