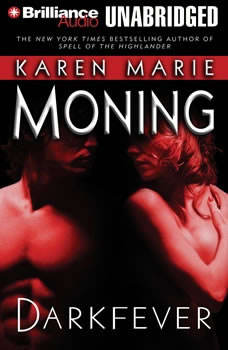 MacKayla Lane’s life is good. She has great friends, a decent job, and a car that breaks down only every other week or so. In other words, she’s your perfectly ordinary twenty-first-century woman.Or so she thinks…until something extraordinary happens.When her sister is murdered, leaving a single clue to her death—a cryptic message on Mac’s cell phone—Mac journeys to Ireland in search of answers. The quest to find her sister’s killer draws her into a shadowy realm where nothing is as it seems, where good and evil wear the same treacherously seductive mask. She is soon faced with an even greater challenge: staying alive long enough to learn how to handle a power she had no idea she possessed—a gift that allows her to see beyond the world of man, into the dangerous realm of the Fae....As Mac delves deeper into the mystery of her sister’s death, her every move is shadowed by the dark, mysterious Jericho, a man with no past and only mockery for a future. As she begins to close in on the truth, the ruthless Vlane—an alpha Fae who makes sex an addiction for human women—closes in on her. And as the boundary between worlds begins to crumble, Mac’s true mission becomes clear: find the elusive Sinsar Dubh before someone else claims the all-powerful Dark Book—because whoever gets to it first holds nothing less than complete control of the very fabric of both worlds in their hands....

This was great in audio -- I'll be first in line for the 2nd book of this series!

I thought it was easy to listen to, just enough action and interest to keep me going, i like the characters developing and the quirkiness of the main character. This isn't a usual romance tho she is a romance novelist- it borders fantasy more than a romance- I like the romantic sparks flying instead of the usual jump into bed /hot sex stuff I see in alot of romances. I enjoyed it and eagerly await the new one!

This series is awesome. The characters are witty, humorous and you will love the transformation of Mac. You have to read them in order though. There are three out so far. I like the Highlander series too, but this one is much better. Not so much a love story as a fantasy/magic/thriller. Full of suspense and action.

I love it when I find a book that catches my attention instantly and forces me to stay up half the night in order to finish it only to wake up wishing I'd taken my time with it because I ended up enjoying it so much. This book was one of these books. Not a lot of romance yet but I foresee more to come in the following novel. This book was very suspenseful without being too gruesome.